Clay Christensen, 2011. (CC/Betsy Weber)
The failure to embrace engineering is, in some ways, merely a symptom of the larger issue that faced virtually all legacy media players of substantial size over the past three decades: The Innovator’s Dilemma, the strategic theory first articulated in a classic business book by Harvard Business School’s Clayton Christensen. In almost every interview, some example of the dilemma surfaced.
Simply put, the theory suggests that even the brightest managers with the best of intentions struggle when they face disruptive innovation because at first the disruptor seems vastly inferior to the current product, both in terms of quality and pricing. Consequently, the incumbent typically abandons the low end of the market, improving margins in the process. Over time, however, as the disruptor improves product and gains pricing power, the incumbent gradually loses the whole market.

As his work was brought up in nearly every one of our 60-plus interviews, we invited the person who coined the phrase “The Innovator’s Dilemma” to walk across the Harvard campus and give us his take on what happened to the news business when the digital riptide hit. 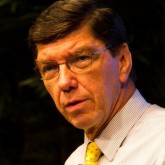 In finance, we teach our students this paradigm that you should always ignore sunk costs and fixed costs and only look at marginal costs and marginal revenue…. [But] when you’re a manager and you look [at only] the marginal cost of using what [you] have versus the full cost of creating something new, always the marginal cost [analysis] trumps [meaning, sticking with the business you have wins out over investing in a new venture].

You might try to send it out [create a separate division to try out the new thing]…but the marginal cost thinking every day causes the accountants to want to pull it back in [to merge the new operation into the core business]. That’s one problem…that many of those [ideas] that could be…the next generation of business just gets brought in and killed….

Clay Christensen describes what causes us to buy something, such as a newspaper like The New York Times.
For a long time, the news industry was fairly adept at the first two types of ongoing innovation. Dow Jones and Gannett, for example, used the satellite to build and extend national distribution for The Wall Street Journal and USA Today, respectively, thus sustaining the franchises for their newspapers. Earlier, the transformation of newspaper production from hot to cold type made the entire industry far more efficient over time.

When digital technology first arrived on the scene, however, news industry managers understandably — but mistakenly — viewed it as an opportunity for sustaining innovation. The early videotex and teletext experiments were meant to create new uses for journalism and find new pools of subscription and advertising revenue. When the services didn’t immediately take off, publishers quickly abandoned them.

[So] it’s true that if you’re in the layer that’s getting disrupted you might go to the beach at low tide and stand out and hold your arms up and command that the tide not come in, [but] the tide actually doesn’t care. Commoditization just happens if you just sit there.

“There was a meeting in the early 2000s where the tensions between the analog part of the company and the digital part of the company were made very clear.”
A decade later, as the web era dawned, many of the industry leaders began to recognize that digital technology might destroy their most lucrative revenue streams. Soon after he became CEO of Knight Ridder in 1995, Tony Ridder was asked by a group of editors what kept him up at night.
Martin Nisenholtz

We’ve read, and I assume it’s true, that when you took over the company, one of the people in the newsroom asked you what kept you up at night. You talked about classified advertising, which was very prescient at the time, but it was looked at in the newsroom as, “Why would that keep him up?”

As you know…from being in the business, newsrooms get criticized for being liberal. But newsrooms are the most conservative organizations anywhere. They are so hidebound…. I would always talk to the editors and ask for all their questions. That was one of the questions. It was like 1994 or 1995. “What keeps you up?” I said, “Electronic classifieds. I think it could really make a big difference to our business.” What they really wanted me to say, I guess, was that we don’t spend enough money on journalism or something.

But it was clear to me that people were going to figure out how to deliver classifieds in an electronic form. We were going to do it, too. But that was going to eat away at this great business that the newspaper industry had, with classified advertising in print form.

We always said from the start — even though this really kind of created a lot of internal tension — I always said, “Don’t worry about eating our seed corn. We’re going to build the best Internet company we can, and it’s going to mean we’re going to take business away from the print.” But that was very difficult to do. And publishers would say, “All right, Tony, that’s easy for you to say, but you’re putting pressure on me to perform, and I’ve got more revenue from the print.” That was always the tension in our business. We were trying to run a public company where we were being compared to Gannett and Tribune and The New York Times, and we had profit pressure.

One of Christensen’s prescriptions for The Innovator’s Dilemma is for companies faced with such disruption to form separate units that are empowered to compete with the core business, creating the new disruptive force from within. Somewhere along the way, most news companies tried this approach, but it usually lead to cultural clash and internal tension. Crovitz, who managed such a unit at The Wall Street Journal, recounts a story typical of the era:

On the digital side, we were highly offended by this notion because we had spent years trying to establish value for the digital part. You couldn’t get access without being a paying subscriber. But from the point of view of the print folks, they were trying to keep their ABC [audited subscription] number at a level that they were told it needed to be to support advertising.

There was a meeting scheduled…. I had a prop for the meeting: …I put in the middle of the table a toaster. At that time, banks would give toasters to people if they opened an account. I said at that meeting, “What am I doing here? You want my product to be your toaster.”

News companies also attempted to create consortia among the various players to achieve the scale necessary to compete in the marketplace. From the New Century Network formed by a group of newspaper publishers, to the current Next Issue Media in magazines, these ventures have often been mired in strategic disagreements and ungovernable board structures.

We sat successively on the boards of three companies, one of which is still in existence. One called New Century Network, which consisted of the very smart representatives of eight or nine companies, each probably the smartest person within that company, sitting around a table, I think all eight of them under the impression that they were going to run the business or that their ideas were so much better than anybody else’s that they should prevail. Then they would go back, and they would review the plans with the CEOs being asked to put all kinds of money to fund these investments, and the CEO would say, “I don’t want to do this. I want to do that,” or “Is this guy running the place any good? Let’s put in this better person I know.”

Moreover, as Christensen points out, managing a separate digital business unit necessitates accepting a higher cost structure than combining efforts in one newsroom.

Many of the people who were working on the digital side of traditional news organizations became frustrated with cultures seemingly unable to adjust to change. Betsy Morgan, who managed CBSNews.com before leaving to become CEO of The Huffington Post, recounted how that played out: 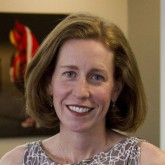 I wanted to show them something very early on that was called Google Trends. It was in Google Labs at the time [2006].

We took these [Google] engineers around to meet various senior producers and executive producers. I said, “This is fantastic.” You could change your lineups for the evening news based on what’s trending that day on Google if we had current data. Won’t this be fantastic for some of the investigative reporters at 60 Minutes or 48 Hours? You’re going to see connections to things you never would have seen before.

Betsy Morgan talks about the essential cultural differences between an established media company and a disruptive one.
These Google engineers were fabulous and smart and articulate. I got shut down. I was told that, had I not learned anything at the time I had been at CBS News? Had I not learned that this was not the way journalism was done, and that these funny, skinny kids from Google had nothing to say about the business, about the creation of journalism?

I have to say, that was sort of a breaking point for me.

Perhaps the most aggressive and innovative traditional newspaper company through this period of disruption was Tribune. From the outset, they understood The Innovator’s Dilemma, set up separate digital operations and led in the creation of two successful industry initiatives, CareerBuilder and Classified Ventures. Still, the company failed to make the transition. The short version of the story is that in 2000 Tribune paid the now astonishing sum of $8 billion to acquire Times Mirror (and the background was explored in detail by AJR). At roughly the same time, of course, AOL managed to leverage its enormous market value (of more than $150 billion) to buy the earnings-rich media conglomerate Time Warner.

Both deals would end up in the history books as historic disasters for all kinds of reasons, but one of the major side effects was that they severely disrupted much of digital progress that had been underway at the legacy media companies.

Knight Ridder was Tribune’s partner in CareerBuilder. It had experimented with every interactive technology since videotex. Its lab in Boulder, Colorado, had envisioned the iPad 15 years before Apple introduced it. The company was the first journalism company to partner with AOL, the first to work with Netscape at the Mercury Center, the first to follow Christensen’s prescript to break out a separate digital operation. Yet, in the end, the company failed. Sitting in his living room, with its majestic view of the Pacific Coast and the ocean waves breaking over the shore on the Cypress Point Golf Club in Pebble Beach, we asked Tony Ridder about the central metaphor of our oral history project: the swimmers and the tide.

The tide is basically the march of technology and innovation. The swimmers are the folks making the decisions, people like you, throughout this history…. No matter what decisions anybody made, the technology (the tide) was just going to overwhelm…. Is that true, do you think?

I do think it’s true.